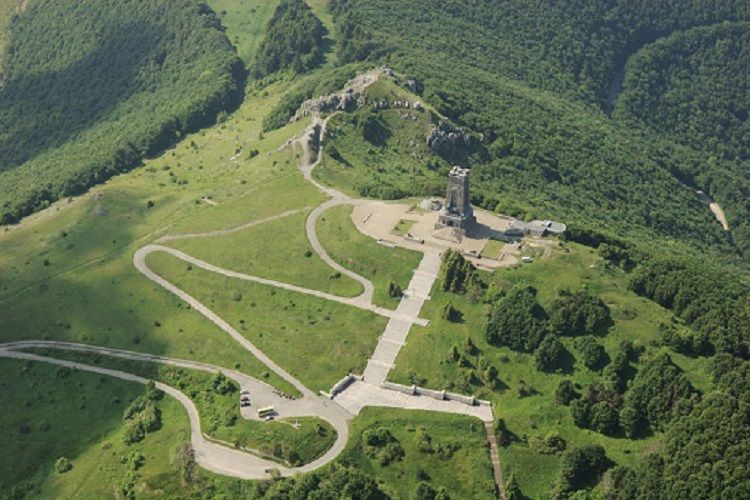 At the top of the Szipka Pass (1306 m), over the Stara Planina, between Gabrow and the village of Szipka, there is a huge monument (1934 r.) in honor of Russian soldiers and Bulgarian volunteers, who in August 1877 r. they repelled numerous attacks by significant Turkish forces, trying to come to the aid of the besieged Turks in Plewena.
Many Polish soldiers and officers died on the pass, among them lieutenant Wojciechowski, decorated with the cross of St.. Anna in the battle of Stara Zagora, captain Jakubowski, General Dorożyński. When General Dorożyński died, General Pietruszyński took command.
The Volyn Hill (name from the Volyn Regiment) was defended by the Żytomierz Regiment, after the death of two more commanders, headed by Lieutenant Colonel Kobylański. Mały Bedek peak was captured by the unit of Major Wojno-Rodziewicz at the beginning of the battle for the Szipka Pass.
The position near the Wołyński Hill was defended by weakening troops under the command of Colonel Lipiński. A colonel came to his aid… Leo Tolstoy, author of War and Peace. Heavy fights took place in the positions of Łysy Las. The troops were commanded by colonels Pietruszyński, Kobylański, Lewandowski. Regiments took part in the battle for Szipka: Żytomierski, Podolski, Volynsky, Warsaw, Wileński, Podolski. He distinguished himself 13 the battalion of major Klimowicz. It is impossible to list all units and their commanders.
Jan Grzegorzewski stated in his book A Year of Upheavals: “Almost half of the army of W.. Prince Nicholas was made up of Poles, yes in the soldiers, as well as in officers”. Army Chief of Staff, commanded by the brother of Tsar Alexander II (Oswoboditela way cara, as the Bulgarians call him), Prince Nicholas, was General Artur Niepokójczycki, and his deputy was General Kazimierz Lewicki. So it is difficult to bear the ubiquitous information about monuments erected to the heroic Russian soldiers… Polish cannon fodder was plentiful there, brains too.
Shipka is a peculiar village, lying 13 km below the mountain pass. Among the trees are five bulbous golden domes, crowning a large votive church (1902 r.), erected here after the Russo-Turkish war (1877-1878).
In the crypt of St. 18 the remains are buried in marble sarcophagi 18 941 soldiers, fallen in the mountains of Stara Planina. On 36 their names are engraved on marble plaques. 17 church bells, beating on every anniversary of the battle, cast from melted shells, bullets and artillery shells. The heaviest one weighs 11 your.
At the top of Buzłudja there is a monument to Haji Dimitri who died in this place in the fight against the Turks in 1868 r. From the pass there is a wonderful view of the Rose Valley. The Stoletow Peak with the Eagles' Nest, from where the defenders of Szipa threw stones (when ammunition ran out) on the troops of Suleiman Pasha, Buzłudża peak and its surroundings are a park-museum of national remembrance.
Among the many proudly rising monuments, you can see five forgotten mounds, hiding the bones of the brave soldiers of Suleiman Pasha…
Camping Stoletow (cottages) located at the top of the mountain pass, in winter it gets considerably colder here. There is also a private hotel, St. Nikola, at the top of the pass (tel.2765). Near a huge memorial pavilion 12 km east of the pass, behind the side road, is the Buzludza hostel, a good base for mountain hikers.
A bus leaves every hour from Szipka # 6 to Kazanlak (12 km).