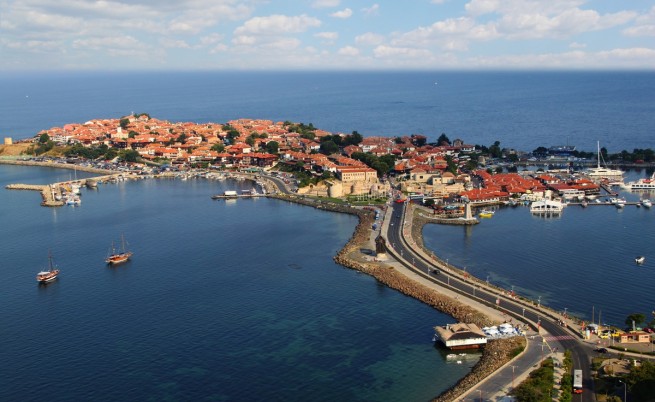 Nose brush, ancient Mesembria, was founded on the site of an earlier Thracian settlement existing in the 7th century. p.n.e., by the inhabitants of Kalchedon in 510 r. p.n.e. Mesembria was sustained by trading with the Thracians, but after the conquest by the Romans (I w .p.n.e.) declined. Under Byzantine rule, Mesembria regained its previous position and in the 5th and 6th centuries. Many magnificent churches were built here, m.in. The Old Metropolis, after which only ruins remain. The Byzantine nobility who came here built more churches, there were all of them 40.

From 812 r., when Khan Krum annexed the city to his Bulgarian state, Nose brush (Slavic name, used until now) it passed from the Bulgarians to the Byzantines many times. Fortunately, the city itself did not suffer from this. Even the Turks left them alone, allowing fortifications to be strengthened against the Cossack pirates. W XVIII w. Nessebar lost its position as an important commercial center to Varna, and then Burgas. Currently, the inhabitants of Nessebar make a living from fishing and tourism. The city is fully recognized as a museum, good of national culture.

It is situated on a small rocky peninsula, with the mainland connected by a narrow isthmus. Remains of the city walls are visible above the bus station (IV and V w.). Winding cobbled streets stretch among solid stone houses with wooden steps and bay windows. Nessebar is becoming more and more commercialized, tons of tacky shops here, offering tourists goods at exorbitant prices. In the summer, narrow streets are flooded with sellers and tourists from the nearby Sunny Beach, yes, that you have to wade between them. Fortunately, the crowd in the southern part of the town is less dense.

The telecommunications center is located in the post office, in the center of the old town (open daily, 7.30-22.00).

There are over a dozen medieval churches scattered around the city, most of them are decaying. The transverse ones are characteristic of the Nessebar style, alternating stripes of white stone and red brick, decorative arches supported on pilasters and facades decorated with ceramic rosettes and shields.

Particularly noteworthy is the 11th-century New Metropolis of St.. Stefan, lying above the harbor. Almost the entire interior is covered with frescoes, with over a thousand characters. At the Archaeological Museum, located in a modern building within the city walls, you can watch a small one, but a well-chosen collection of interesting exhibits. It is also worth checking the program of concerts taking place in the ruins of the 6th century. Old Metropolis.

Mesembria Touńst Office (tel.2855, only open in summer), between the bus stop and the port, offers private accommodation for the price 20 $ for a double room (there are no single rooms). Many accommodation units are located in the new part of town, close to the beach, in the western part of the isthmus.

Hotel Mesembńa (tel.3255) rather reluctant to serve individual clients, however prices are stated here on 20-32 $, for one-, double rooms.

There are many places in Nessebar, where you can eat and drink. Kapitańska Sreczta restaurant in the old town, it's an old captain's house and has its own atmosphere. A typical place for tourists (waiters dressed in sailor's uniforms), you can get good seafood dishes here.

A bit in the distance, near the eastern end of the city, there is a restaurant Łozaiska Kyszta, is a typical Bulgarian tavern serving local meat dishes.

Stara Kawak on a small square, next to the church of St.. John the Baptist, offers al fresco dining, in the shade of an oak tree. Good cuisine and efficient service.

Between Nessebar and Sunny Beach (10 km) buses run regularly (always overloaded). In Sunny Beach you can change to Burgas or Varna.

Mesembria Tourist Office provides information on private, direct buses to Plovdiv or Sofia; reservations must be made in advance. You can also inquire about water transport here. Hydrofoil courses have recently been suspended, but if the demand for this type of service among foreigners will ensure financial profitability, perhaps, they will be reactivated.