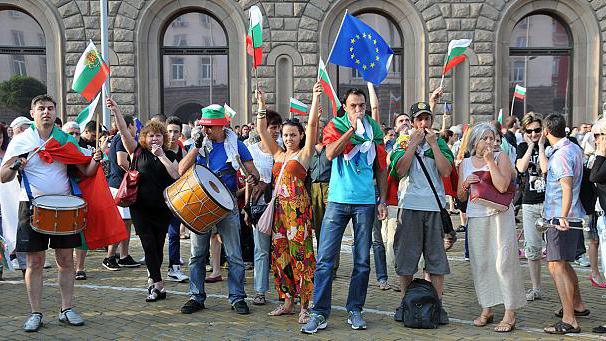 Bulgarians, just like the Serbs, belong to the group of southern Slavs. Turks are the most numerous national minorities (8,5%), Romanians (2,6%) and Macedonians (2,5%). Macedonians are the majority in the Pirin area, south of Sofia. The question has aroused controversy for almost a century, whether Macedonians are Bulgarians, whether they constitute a separate ethnic group. Bulgaria officially recognizes Macedonia as a country, but does not recognize Macedonians as a nationality. Activists trying to organize politically the Macedonian minority in Bulgaria face persecution by the authorities.

Turks, which are about 800 000, most of them inhabit the area at the foot of the Northeast and Eastern Rhodope Mountains. In years 1912-1940 about 340000 Turks left Bulgaria for Turkey, and after World War II, it left the country again 200 000 people. The beginning 1985 r. the communists created a plan for the forced assimilation of the remaining Turks, whom they forced to take Bulgarian surnames. The circumcision of boys born into Islamic families was forbidden, Separate Islamic cemeteries were closed, many mosques were closed and Ramadan was attacked (month of fasting). It was even forbidden to wear Turkish clothes and use the Turkish language. At the beginning 1989 r. there were mass protests against these restrictions, and after the easing of passport law 350000 people of Turkish origin left for Turkey (some of them returned to Bulgaria). After the fall of Todor Żiwkow at the end 1989 r. mosques opened, a w 1990 r. a law was introduced allowing the restoration of Turkish surnames. W 1991 r. the possibility of teaching in Turkish in state schools appeared.

In the Rhodope region, south of Plovdiv live approx 250 000 Pomaków (descendants of the Slavs, who converted to Islam during the Ottoman Empire). In the past, the Pomacians were subjected to the same assimilation process as the later Turks. Out of 550 000 Many Roma live in the Rose Valley (especially around Sliven) and although the communists improved their living conditions, they were denied the right to maintain their ethnic identity. Three-quarters of Roma profess Islam.

At the outbreak of World War II, there were approx 50 000 Jews, and almost all of them, survived the war thanks to Bulgaria's resistance to the demands of the fascists, that Jews would be deported to extermination camps in Poland. Although the Jews were gathered in local labor camps and had to wear the Star of David, no one was extradited to Germany. After the war, most of them left for Israel and currently only live in Bulgaria 5000 representatives of this nationality.