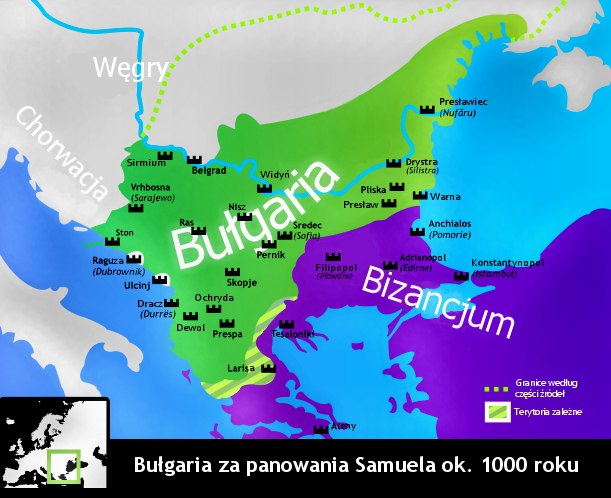 Chan Asparuch, having defeated the army of the Byzantine emperor Constantine IV along the way, he crossed the 679 r. The Danube and took over the country between Stara Planina and this river. He pushed the Slavs of Siewierc who lived there to the barren mountain areas in the south-east, and the tribe of the Seven Clans south and west, then he established a fortified camp, which became the capital of the First Bulgarian State in the Slavic lands. It was called Pliska. W 1981 r. celebrated solemnly 1300. anniversary of this event.
After two centuries of Proto-Bulgarians, Turkish Hunnic peoples, they abandoned the language and customs of their ancestors, undergoing complete Slavization.
The new state of Asparuch and his successor, Tervel, waged war with Byzantium with changing fates, taking advantage of the rivalry of the emperors for the Byzantine throne.
And it was Khan Tervel, for helping Justinian II, he received the title of Caesar, vested, so far in history, only the rulers of Rome. This name of Khan Tervel appears in the inscription next to the famous Rider of Madara.
The war struggles of the Byzantines with the state of the khans did not stop during the reign of the Khan Krum (about 803-814), whose court was already mostly Slavic. Krum demolished the Byzantine fortress of Serdika (Sofia), to facilitate the march to Sklavinia. In response, the Byzantine emperor Nikephor I demolished the Krum palace in Pliska, and Serdika was quickly rebuilt. And he promised Krum, that he would drink the wine from his skull!

Only the death of Khan Krum in 814 r. during the expedition to Constantinople, she saved Byzantium. W 818 r. son Kruma, chan Omurtag, waged war with the Franks of Louis the Pious and conquered the Obodrites and other Slavic tribes in the west.

W 847 r. Khan Presjan finally took Macedonia from the Byzantines. His son Boris (pan. 852-889), to the delight of the pariarch of Constantinople Photius, competing for a government of souls with the Roman Pontiff, he was baptized 25 May 866 r. by the Greek clergy, taking the name of Michael, in honor of his godfather Michael III, Emperor of Byzantium. Supposedly a Byzantine monk, painting a picture of hell on the palace walls, so terrified Boris, then chana, that he decided to accept Christianity…

Pope Nicholas II immediately sent his legates and clergy to Boris. However, the Latin rite in Bulgaria was not introduced. The Greek clergy triumphed over the Greek liturgy, but thanks to the missionary activity of the disciples of Constantine (Cyril) and Methodius, Slavic writings developed at the court of Boris and his son Tsar Simeon, both secular, and church ones. The Cyrillic alphabet was used, different from the Glagolitic one, which Cyril actually created.

Schools in Pliska, Ohrid and Veliko Preslav were the first centers of writing in Europe, where literary texts were written in languages ​​other than Hebrew, Latin or Greek. At that time, the first Slavic schools were founded by Kliment Orchydzki, disciple of Saint Methodius.

W 889 r. Boris handed over power to his son Vladimir, and he himself entered a monastery. When the new ruler in Pliska began to persecute Christians and worship old gods, Boris arrived, ordered Vladimir to be blinded, he introduced his second son to the throne, Symeona, moving the capital to Presław, and he himself returned to the monastery. Simeon waged victorious wars with the Byzantine Leo V the Wise, but he lost two battles with the Finno-Ugric tribes, Hungary, and took refuge in the fortress of Drystra. Again, Boris left his cell, he gathered the army and, having driven the Hungarians as far as Bessarabia, he returned to his monastery, where he died in 907 r. Soon the Bulgarian Church recognized him as a saint. W 869 r. Prince Simeon, with the help of the Pechenegs, invaded the Hungarians in Bessarabia and pushed them out to Pannonia, where the Finno-Ugric tribes already remained.

W 913 r. Prince Simeon stood outside the walls of Constantinople. In exchange for peace, the endangered Byzantium offered him the title of emperor and a vow to marry the daughter of Simeon by the underage Emperor Constantine VII.. The treaty was broken by the Empress Mother Zoe Karbonopsina, soon Simeon set out on Byzantium and finally defeated the imperial army of 917 r. on the river Achelo (Achełoj). Happiness was near, but the wise Roman I Lakapetus saved Byzantium from Simeon. The Bulgarian prince only regained the title of emperor (way), not, however, conquering the coveted Byzantine Empire. He died while preparing for the next trip. His successor, Tsar Peter, confident in the power of his country, disregarded Byzantium, whose emperor, Jan I Tzimikles, in response to the Bulgarians they demanded protection money, he sent his ally with a punitive expedition to Bulgaria, ambitious Grand Duke of Kiev Sviatoslav. The effect of this not the best decision was the capture of Bulgaria by Sviatoslav, from whom, in turn, John I Tzimikles had to take her by force.

The Bulgarian Empire with its capital in Presław ceased to exist. Ruling over the Western Bulgarian Empire, which Tzimikles, busy with the war with the Arabs, did not manage to conquer, The Komitopula brothers sent to 973 r. envoy to the court of the German Emperor Otto I in Quedlinburg, with a proposal for an alliance against Byzantium. Admittedly, it did not change the history of the world, but let us remind you, that they met there with the envoys of the Polish prince Mieszko I.

Komitopulowie – David, Moses, Samuel i Aron – they intended to revive the great Bulgarian empire and obtain the title of basileus for its ruler, that is, the emperor, and in this case the Tsar of the Bulgarians. As a result of many years of fighting with Byzantium and new conquests, the Bulgarian Empire 1000 r. it covered almost all of Macedonia, Thessaly, Epirus, Serbian principalities and Danube Bulgaria. David and Moses fell in battle, Aron was ordered by Samuel to be killed, to become the sole ruler, we would like to (997-1014). Ohrid was the capital of the great empire.

When the Byzantine emperor Basil II overcame internal difficulties, he moved against Samuel, getting brighter and brighter victories. W 1014 r. he carried away Samuel's army in the gorges of the Belasica mountain range, taking captive 14 thousand prisoners. He ordered everyone to be blinded, he only instructed every hundredth to leave one eye, so that he could lead his squad 99 the blind to Samuel, who was sitting in Prilepa at the time, where he fled from the battlefield. As soon as the tsar saw it 14 thousand blind men, he died struck by apoplexy. Basil II was then nicknamed the Bulgarian Murderer. W 1018 r. the Bulgarian Empire ceased to exist.