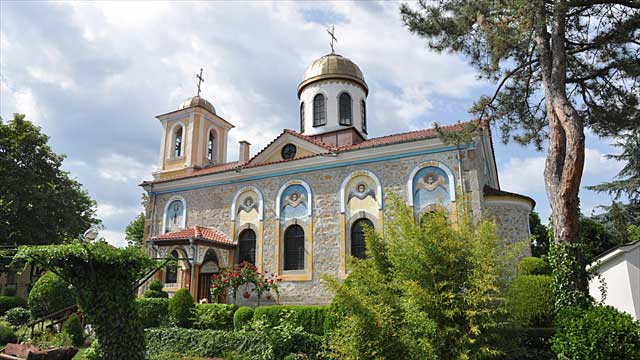 On the way to Chisaria, there is the spa town of Bania, with deposits of therapeutic peat. Samaritan, situated on the slope of Sredna Gora, is the largest spa in Bulgaria with drinking mineral waters and a world-famous balneological center. Spring waters cure various diseases. It was a famous spa already in the times of the Romans and Byzantines, who were bathing here. We are still bathing in baths with foundations built by the hands of the Romans, but the Thracians were treated here earlier than they were.

The city was successively called Augusta, Diocletianopolis, for the Byzantines of Se-bastopolis and Aleksiopolis, and the Turks named it Hissaria (fortress), probably because, that they had difficulty tearing them down. Just – to protect yourself from the barbarians – The Romans surrounded the city with a 2,300-meter wall, in which there were four entrance gates. On the sides of the main gate there are statues of deities. Fragments of walls and gates as well as a Roman tomb from the 4th century have been preserved., z mozaikami i freskami. In the period of its greatest prosperity in the 5th and 6th centuries. erected 9 basilicas, for Aleksiopolis was the seat of the bishopric. However, one must add, that the oldest basilica was built in the 4th century. Christianity spread very early in the Balkans. The tombstone of the vicar of Thrace was also found, Solomon (VI w.). The Archaeological Museum keeps Thracian monuments and architectural fragments of Roman and Byzantine buildings. In Chisaria you can also see a mosque and an Orthodox church, and in the theater, built according to the best Roman patterns, there is a summer theater.

Towns of roses and apostles of freedom

Rose Valley, situated in the valley between Sredna Gora and Stara Planina, it stretches from Kazanłyk to Klisura. This is where the heroes of the Bulgarian National Revival acted, insurgents of the April uprising, called in Bulgaria the apostles of freedom. Kałofer was the city of Christa Botew, which was modeled on the tactics of Polish insurgents, with whom he kept close contacts; Wasił Lewski was born in Karłów (there is now a museum in his reconstructed house); in the city of Sopot – poet and writer Ivan Vasa, author of the well-known novel Pod yrzmem and translation of the Epilogue from Pan Tadeusz. The clisura was destroyed by Tlucy for joining the April Uprising by its inhabitants (1876 r.).

The Trojan Monastery went down in the history of Bulgaria with golden letters (12 km from the city of Troyan). Wasil Lewski's committee had its seat here, whose members were also monks and local priests. For centuries, the monastery has provided shelter to haiduks and these who were persecuted by the Turkish authorities, who fled from their punishing hand. More than once the Turks looked for Lewski here… However, the monastery has many nooks and crannies and is huge – is the third largest monastery in Bulgaria. It comes from the 15th century. Zachari Zograf, representative of realistic painting, w 1849 r. he decorated the walls with magnificent frescoes. Apart from the greatest treasures of the monastery – manuscripts and old prints – there are great icons out there, made by painters of the Triaavna school.

He was walking along the Trojan Pass, crossing the mountains of Stara Planina, Alexander III the Great 334 r. p.n.e. in his great procession to meet the Persian ruler Darius III. And yet the Thracians had traveled this way earlier… Following these old footprints, Emperor Trajan drove the legions, to build a way out of Moesia (Mizja) over Vienna to Philippopolis (Plovdiv). Did he know, that distilleries in this city, which he will build on the pasture, they will run the best Bulgarian rakija, and only she will make him famous, Trajan, name?

With Oescus (Gigs) on the Danube there was a Roman road to Philipopolis (Plovdiv). Melta fortress protected this trail. Later it was also a stronghold of the tsars Asen and Peter (Second Bulgarian State), who expanded the city. Its ruins remain. On the Osym River, 'golden hands” the self-taught Ficzet Circle erected a magnificent covered bridge with walls, windows and stalls.
The main branch of the liberation committee was located in Lowecz, led by • Wasył Lewski.
East of Lovech (20 km) Dewetaszka and Wodna caves are located near the Osym River, with underground rivers, waterfalls and lakes. The local stalagmites and stalactites are of exceptional beauty. Traces of the presence of a Stone Age man were found in them.