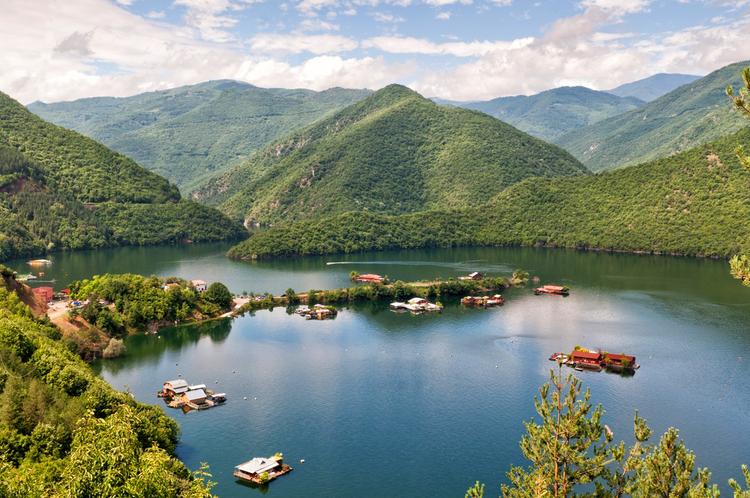 Rhodope Mountains – The Rhodope Mountains are inhabited by ethnically distinct communities in Bulgaria. The landscape is adorned with the Tregrad and Jagodina gorges and steep ones, rocky slopes of the Perela range, which then becomes rowed fields and pine forests. An example is the Izworo or Borowo reserves, great for hiking. The Eastern Rhodope Mountains are rich in plant and animal forms.

The traditions of the old Bulgarian Slavs are strongly rooted in the Rhodope region: pagan rituals are still held in many villages, folk music is still present in the culture of the region. Most Bulgarian Muslims live in these areas; both Pomaks, whose ancestors changed religion during the Ottoman Empire, as well as ethnic Turks. During the communist era, a 20 km restricted zone was created along the southern border of Bulgaria, to ensure strict isolation of the inhabitants of the local villages.

Although there are buses to all villages, connections are quite rare; check the connections before going anywhere. You can try hitchhiking, if someone can adapt to it.

The picturesque towns around Plovdiv have interesting monuments and a rich past. Virtually all of them accept tourists and have adequate hotel and catering facilities. In many areas it swiftly (shelters) are the only official accommodation places, but the hospitality of the Rhodope people is being revived. It is therefore possible to receive an invitation to visit someone's home.

Pazardzhik, over Marica, built by the Turks in the 15th century. Turkish merchants from all over the Ottoman Empire came to large fairs. The oldest monument is the Eski Dżamiya mosque, built in 1540 r. In the erected v 1837 r. church of St.. Theotokos, half hidden in the ground, because the Turks forbade Christians to build large temples, there is a unique carved iconostasis: among the plant ornaments you can also see tiny people. The artists from the Debyr school of sculpture have exceeded the Turkish authorities' ban on putting human figures in paintings in temples. What was the rule of Islam, it was also in force in churches in the lands subordinate to the sultan. He is the home-muse of Stanisław Dospenski in the city, the greatest portraitist of the Bulgarian National Revival period. Stanisław's real name was Zafir Dimitrov and he was the son of Dimitri Zograf and the nephew of Zachari Zograf, famous masters of the Samok school. He graduated from the School of Fine Arts in St. Petersburg. It is known that he met Poles there. It will remain a mystery, why he changed his name to Polish.

welgrad – There is a town on the Czepinska River 75 sources, welgrad. There are more of them in the area. The hot springs are used not only for therapeutic baths, but also for heating vegetable and flower greenhouses. There are sanatoriums here, in which are treated, among others. rheumatism, numerous hotels and restaurants.

Batak – “One and the same day, they gained tomb and fame”, Victor Hugo wrote about the heroic defenders of Batak. In May 1876 r. The Turks brutally murdered the elderly gathered in the church of Holy Sunday, women and children. The defenders fell in front of the church. Over then died 4000 people. Europe learned about the cruelty of Turkish soldiers from a Polish correspondent, posted by the English, Antoni Piotrowski. He was also a great draftsman and painter. He captured the events in Batak on a huge canvas, occupying the entire wall of the museum (this in Batak is a copy). Batachan's skulls and bones are kept in the church. “This sacrifice brought the liberation war closer” – wrote by Ivan Vasa.

Dospat – by the river of the same name, it is a charming highlander village, with an ethnographic museum and a school of playing folk instruments.

Smoljan, on the river Czerna, founded the Slavic tribe Smilianie. The settlement was destroyed by the Turks, and then they built their own. Stone houses in the style of the Bulgarian National Revival rise on the slopes of the mountains. In the Rajkowo district there is an Ethnographic Museum with collections of highlander culture objects. Smolyan is famous for the longevity of its inhabitants. Many people were born in the 19th century. In the village of Mogilicy, 25 km from Smoljan, there is a palace-fortress of the Agnuszew family. It has three courtyards, 96 rooms with secret passages, and thick walls around, strong gates and watchtowers. It houses the Rhodope Museum.

Pamporowo is the largest high-mountain health resort (1650 m n.p.m.) in Bulgaria and the second winter sports resort after Borovets. There are cable cars here, cross-country tracks, jumps and lifts. At Snezhanka (1938 m) there is a TV tower, huge cafe and observation deck – you can see the Aegean Sea from here. Numerous hiking trails lead from here – to the Rocks of Orpheus, to the peaks of Studenec, Sneżanka and Murgavec. In autumn, a lot of lilac winterites bloom here. To the west of Pamporov, in the village of Shiroka Lyka, beautiful stone bridges rise above the streams, created by clever nature.

Czepełare at the gorge of the Czepełarska River is the highest in the mountains (1350 m) town. It has a unique Caves Museum, with lots of fossils and minerals.

In Nareczenska Bania there is the famous Solenoto Izworcze (salt spring), whose water at a temperature of 31 ° C has a high content of radioactive components (on 10. place in the world in this respect from similar sources). Even schizophrenia is treated with this water.